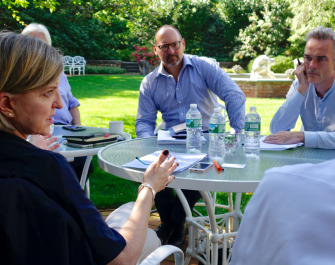 EIP recently hosted a small group of high-level envoys and mediators from the UN, the EU, and the Swedish and Dutch Governments to discuss support in peace processes. Here are our immediate impressions from the discussions.

By Stine Lehmann-Larsen and Ingrid Magnusson

“You need someone whispering into the general’s ear, telling him he is not immortal”

Envoys, like anyone, need critical friends. Friends who can have honest discussions about risks and even point out tactical errors, ‘group think’ and confirmation bias. However, working out from where this critical voice should come is tricky. Mentoring may be effective: it lets envoys discuss with someone they consider a peer, from whom they might take advice, and with whom they can a build relationship that last over time. But success here depends much on personal chemistry between envoy and mentor. Red teaming could be a less personality-driven method: a group within the organisation gets tasked with assessing dangerous outcomes of a certain plan. However, since it is far removed from the common view of mediation as an art form undertaken by talented individuals, this method may be too systematic. In fact, mediation is in many cases not conducted with detailed strategies and clear outcomes in mind and in those cases red teaming is difficult. A middle ground could be someone in the envoy’s team whose task it is to be that critical voice. They would know the envoy and situation well enough that their advice is well-received, while at the same time they are responsible for looking at potential errors or flaws. Mediation support units can look at these options in more depth, to enable an array of actors from within the organisation to provide this critical voice.

Critical support can also come from above. A strong relationship between envoys and their leadership will endure even when discussions are difficult. And here a critical but active leadership is often preferable to a non-interested one. While the latter allows for more flexibility, it also leaves the envoy politically isolated. Political backing is the most obvious benefit of a supportive leadership: it helps envoys navigate geo-strategic realities, provides leverage to pursue normative commitments, thereby enabling the pursuit of strategies with the confidence and open support of their institutions. But there are also other, less evident upsides of active involvement. Beyond much-wanted political backing, robust support can also contain aspects which are not immediately comfortable for envoys – such as the mandating of certain activities requiring self-reflection. Some envoys are new to conflict resolution, and not aware of the kind of support they could benefit from. Pointing out what they need is tough love that sometimes only the leadership can give.

“If you want to influence local processes, you need local people”

Another thing the envoys around the table requested was local help. Understanding local ways is priceless in fleshing out a peace process which is locally rooted and acceptable to people on the ground – and hence more likely to endure. High-level envoys should not try to bring all the answers, but rather ask questions: what has worked here before, and why? What has not worked; what has failed? Which local conflict resolution systems are effective, and how can they be replicated or scaled-up? Knowledge on this can be found among local NGOs who have been active on the ground for decades. They can offer support through their contextual awareness and large networks. Another method is to bring in experts from across the country or region itself. Envoys can set up a group of local advisors, who are intimately aware of traditional and alternative conflict resolution approaches. Acting as a sounding board to the envoy, these experts can help generate creative ideas, using locally acceptable methods.

Another benefit of working with local experts is to understand how messages are perceived by the parties and local communities. What sounds perfectly straight-forward to the envoy in his or her context, may sound very different to local ears.

“Envoys must craft the story… the narrative is so important”

What sounds acceptable to local ears also depends on the story envoys choose to tell. Successful mediators and envoys use narratives to talk about their work, whether they head large missions or run smaller, discreet initiatives. Beyond detailed plans and visions, they need to explain how the process fits into a larger picture. Telling a good story is central to the mediation task: it helps explain to the parties what the envoy’s added value is; it can be the flare that anchors support for the strategy among other envoys; and it may help show headquarters the bigger picture. And for envoys in charge of large missions, a compelling narrative is important for staff morale. It is part of the managerial task of keeping everyone motivated and working towards the same goal.

Narrative development is closely tied to strategy: it gives the strategy colour and helps make it appealing. Related, setting benchmarks and showing progress on deliverables is one of the most important parts of the envoy’s tasks. It is essentially about how to generate support – political and otherwise – for their strategy. The question is, can envoys ask for support in this? Some argue that political strategy development is the preserve of envoys alone while others toy with the idea that support actors can help find and secure the necessary support. But that would also mean that mediation support actors get involved in highly political matters. This points to the bigger issue of whether, and if so to what extent, mediation support is political. While one could draw a clear distinction on paper between technical process support and political work, in reality the lines are blurred. But this can be useful, as it lets envoys present political ideas as technical when they need to. So perhaps those blurred lines serve a purpose?