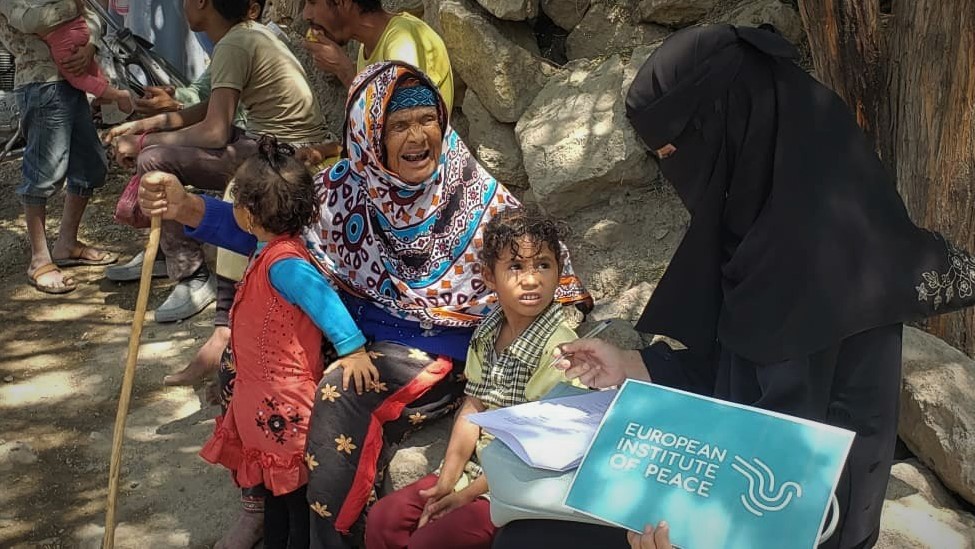 This report presents the results of work conducted in the nine governorates of Shabwah, Taiz, Al-Hodeidah, Al-Maharah, Aden, Ma’rib, Sana’a, Al-Dhale’e and Hajjah. The project is active in a carefully selected 36 districts out of a total of 333 – more than 10% of the country’s total.

The engagement was conducted entirely by Yemeni personnel who were trained and directed by Yemeni experts with the Institute’s support. A steering group of three experienced Yemeni colleagues led and trained a team of 58 researchers (of whom 33 per cent were women) and two support officers to conduct the field work, which required a great deal of ye in the context of the conflict and the Covid-19 pandemic.

The field research consisted of four types of interventions: surveys, interviews, focus groups and community dialogues. Most direct engagements took place through 13,759 structured surveys. Though people were randomly selected to participate in the survey, in order to obtain a representative sample, the target parameters were as follows: at least 30 per cent women; diversity of age groups and education levels; and a mix of ‘ordinary citizens’, educated citizens, and local civil society. The surveys, each of which lasted approximately an hour, contained five sections and 40 questions addressing a range of issues including perceptions about urgent needs, post-war priorities, attitudes about (and understandings of) reconciliation, who is responsible for the human rights violations that have occurred, and how these might be addressed.

Trained local researchers conducted a total of 1,466 individual interviews, which comprised 26 open-ended questions; interviewees were not obligated to answer every question.

The project also convened 36 focus groups i.e. 4 per governorate. In each governorate, there were four separate groups; each comprised 5–10 women, activists, journalists or youth representatives. The focus groups were asked to consider and discuss a set of 10 questions.

Finally, after these steps had taken place and interim findings gathered, nine community dialogue conferences (i.e. one per governorate) were facilitated virtually or in hybrid settings. The steering committee and Institute convened mid- to high-level government officials, political leaders, traditional and tribal leaders, military officials and prominent governorate figures. An average of 40 participants were asked to answer and discuss a set of six questions covering a range of issues raised in the previous three consultation tools (i.e. survey, interviews, and focus groups). These dialogues were the most open forum for discussions and included people with diverse backgrounds and often opposing views.

The nine governorates were selected based on the following criteria:

Within those governorates, districts were selected based on the density of the population and operational accessibility.

The project has two main goals. The first is to identify and understand citizens’ needs, wishes and rights in the pursuit of peace. The second goal is to assess whether tailored approaches may be required based on experiences and dynamics in specific areas.

The project explored these topics using a combination of surveys, interviews, focus groups and community dialogues. This report presents the results and conclusions organised by theme. Figure 1 summarises the project locations.

In summary, the total number of persons engaged per governorate is as follows:

A variety of methods and formats were used to collect the data presented here to ensure the views gathered extend far beyond the usual political, business and intellectual voices to capture citizens’ authentic needs and perspectives. The surveys and interviews provided unfettered views. The more public the forum became, the more social and cultural norms tended to determine how forthright people were. Community dialogues were to some degree dominated by the more powerful voices in the social and political hierarchies. This dynamic was less pronounced in the focus groups since they were composed of similar types of people.