Protecting the achievements in Afghanistan: Europe’s role in supporting civil society and democracy after the NATO allies withdraw 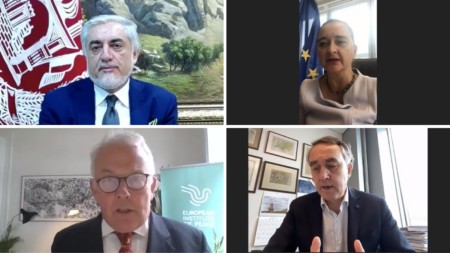 The European Institute of Peace in cooperation with Member of the European Parliament and Chair of the Delegation for relations with Afghanistan, Petras Auštrevičius, hosted an online event on 1 July on Europe’s role in supporting civil society after US and NATO allies withdraw from Afghanistan.

PROTECTING THE ACHIEVEMENTS IN AFGHANISTAN

Afghanistan has faced severe challenges over the past 20 years since US and NATO troops were deployed, though there have been some notable achievements.  Dr Abdullah Abdullah, Chairman of Afghanistan’s High Council for National Reconciliation spoke of “critical gains” in a range of areas, including democratic values, human rights, women’s rights, gender equality, the rule of law and inclusive growth, as well as minority rights.

Other achievements over the past two decades have been a 10-year jump in life expectancy, improved literacy levels, and a reduction in maternal and child mortality.

All panellists underlined the importance of protecting these achievements.  Marjeta Jager, Deputy Director General for the Directorate-General for International Partnerships confirmed that the EU is fully committed to supporting the people of Afghanistan and has constantly called for a ceasefire and will continue to do so. She underlined recent progress in gender equality among other achievements, referring to a 50 percent quota of community development council members and over one quarter of public service workers now being women.

Member of the European Parliament and Chair of the Delegation for relations with Afghanistan Petras Auštrevičius expressed his support for the Afghan people, adding that the EU financial support should be contingent on basic principles of democracy, human rights, rule of law, good governance and the fight against corruption. Ms. Jager confirmed that EU assistance will be maintained or adjusted depending on the country’s continuing commitment to these principles.  She also reiterated support for civil society and media freedom in Afghanistan.

During the discussion, Mr. Keating referenced the European Union strong track record in Afghanistan with over 4 billion euros in development assistance being provided since 2002, representing 80% of the total Official Development Assistance (ODA) to Afghanistan.  Ms Jager listed the priority areas of the multi-annual Indicative Programme for Afghanistan 2021-2027 as: enabling peace with the focus on reconciliation reintegration, security and the rule of law; strengthening the state-building and previous work on institution building and public service; and sustainable and inclusive economic growth with the focus on trade, regional cooperation and employment.

Dr Abdullah acknowledged the EU’s ongoing commitment, reiterating that the priorities of the people of Afghanistan are the ones the EU is focusing on.

THE CHALLENGES FOR CIVIL SOCIETY

The deteriorating security situation is one of the main challenges the Afghan civil society is currently facing. Dr Huma Saeed, Senior Researcher of Human Rights and Transitional Justice at the University of Leuven said some 70% of Afghans currently identify themselves as direct and indirect war victims.  Afghan women and children, she said, are the most adversely affected.

As NATO allies complete their withdrawal, there have been an increasing number of targeted attacks against Afghan members of civil society, women leaders, and journalists. This has forced many NGOs and organisations that provide humanitarian aid and women shelters to cease their activities in Afghanistan. It has also led to a dramatic increase in the number of IDPs in the country.

“Violence needs to stop to make peace work”, said Ahmad Masood Amer, Executive Director at the Centre for Afghanistan Policy Studies on the impact of violence on the peace process. “While negotiations are underway, civilians are being killed.” He added that, in order to stop violence and killing of civilians, the EU and the international community need to conduct fact-finding missions to independently investigate the circumstances behind the killing of Afghan civilians and bring them to justice.  Human rights activist Fariha Easar noted that without security, neither the government nor civil society organisations would be able to run and provide services.

A lack of government accountability and corruption within the security forces was highlighted as another major challenge for civil society.  Mr Amer argued that there is a need to look at how aid has been utilised and how it has been governed.  He believes there needs to be a more rigorous relationship between the Afghan government and domestic institutions. Ms Easar commented on the structural weaknesses within the country’s security forces, which, she said, remain ill-equipped and poorly trained despite US and NATO financing.

Other challenges for civil society include a perceived reluctance from the Taliban to engage in talks, food insecurity currently affecting some 12 million people, deteriorating political and economic stability, climate change and environmental degradation and issues connected to the Covid-19 pandemic.

Dr Abdullah expressed concern over the Taliban’s commitment to a mediated solution saying, “a military solution is not acceptable” and that civil society have an important role in helping to spread this message.   He added: “The signs are not that optimistic in terms of their intentions but that does not mean negotiations should stop.”

The panel focused on a ‘carrots and sticks’ approach to encourage the Taliban to consider achieving their objectives through a political process rather than militarily. “If they take power by force, they are going to inherit huge problems both in terms of security in the country and in terms of responding to the needs of the population,” said Mr. Keating.

Dr. Saeed recognised some positive steps towards a mediated solution, highlighting successes in bottom-up, victim-centred peace processes.  She described the renewal of the EU Afghanistan Peace Support Mechanism as a ‘welcome step’ towards an inclusive peace process that comprises women, minorities and civil society.