Climate-Fragility Policy Paper: Europe and Climate Security: Is Europe delivering on its rhetoric? 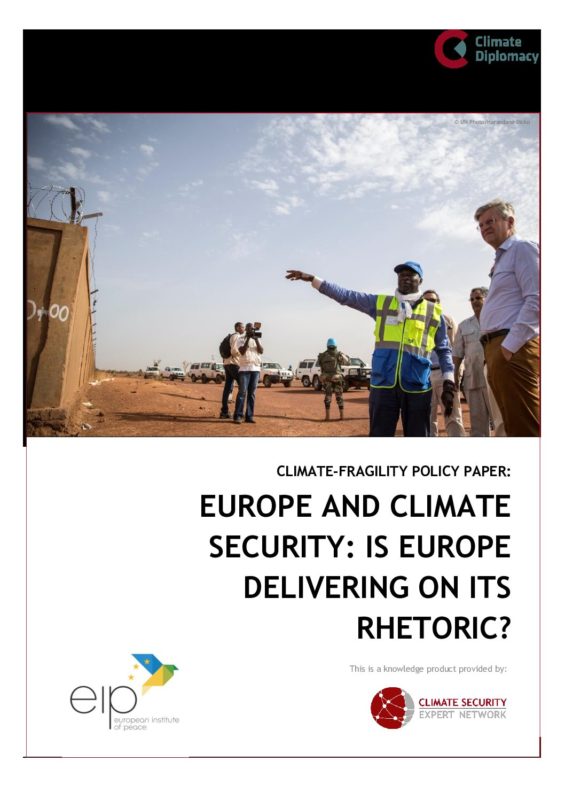 Europe is a champion for greater action on both climate change and the pursuit of international peace and security. Over the past 15 years, the combination of the two issues, or climate-related risks to peace and stability, have risen fast up the European agenda. Landmarks have included: the UK’s sponsorship of the first ever UN Security Council debate on climate change in 2007; High Representative Solana’s 2008 report on Climate Change and International Security; the successful adoption of the Paris agreement in 2015; the 2016 Global Strategy for the EU’s Foreign and Security Policy; High Representative Mogherini’s June 2018 high-level meeting on Climate, Peace and Security; and the 2019 European Green Deal.

European countries and EU institutions have certainly given a great deal of political attention to the security threats posed by climate change. This report explores the extent to which this policy focus has influenced the international agenda and the degree to which it has translated into improved European responses to the causes and consequences of insecurity in fragile states.

Europe’s efforts to overhaul its own energy systems and economic model to reduce emissions of greenhouse gases, captured most clearly in the European Green Deal presented in 2019, could have a range of geopolitical and global security consequences, including on peace and conflict dynamics. These also need to be anticipated and addressed if Europe is to have a coherent, effective and positive impact on the growing security threats presented by climate change, biodiversity loss and environmental degradation.

The report proposes three areas for action. The first is to ensure that climate security stays high on a packed and urgent international agenda. The second area for action aims to ensure that European operations in fragile states address climate insecurity in their programmes. The last area for action relates to investments in conflict prevention, mediation and peace processes.