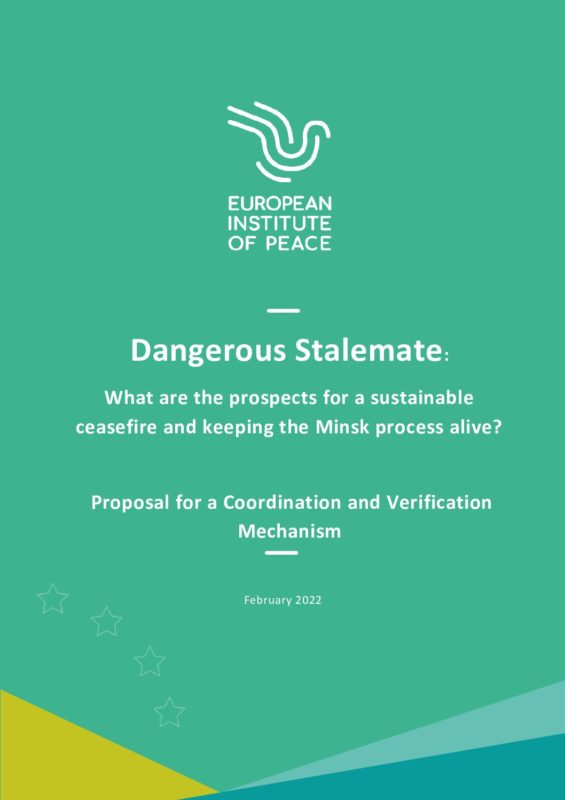 What are the prospects for a sustainable ceasefire and keeping the Minsk process alive? Proposal for a Coordination and Verification Mechanism.

Seven years have passed this month since the Package of Measures for implementation of the Minsk agreements called for an “immediate and comprehensive ceasefire in certain areas of the Donetsk and Luhansk regions of Ukraine and its strict implementation…”.

Despite endorsement by the UN Security Council Resolution 2202 (February 2015), little or no progress was made in implementing the Minsk agreements, with continued conflict and violations of the ceasefire reported by the OSCE Special Monitoring Mission to Ukraine (SMM) on an almost daily basis. Almost 14.000 Ukrainians lost their lives, thousands more were injured, and millions displaced. With no effective ceasefire in place, this is not a “frozen conflict,” and violent escalation may happen by intent, misunderstanding or miscalculation.

Today an even more dangerous stalemate has emerged. Deep international concerns have been raised about the reported Russian military build-up along the country’s borders with Ukraine. Further raising the stakes, broader security issues have re-surfaced with Moscow demanding inter alia guarantees from the US and NATO to refrain from any further enlargement of the alliance, including the accession of Ukraine and other states. Despite intensive and on-going international consultations at all levels, there are no signs yet of de-escalation of the crisis.

This report has been prepared in consultation with a group of Ukrainian and Russian experts who have been conducting quiet discussions during the past two years on the Minsk peace process and, more broadly, relations between the Russian Federation and Ukraine. These talks are held under the auspices of the European Institute of Peace.[1] Out of deep concern with present developments, it was decided to share more widely the broad consensus among the participants about the urgent need for a sustainable and durable ceasefire as a prerequisite for implementing the Minsk agreements.

In a recent encouraging development, the advisers to the Normandy Four (N4) heads of state and government have supported in a joint statement after their meeting in Paris “unconditional observance of the ceasefire of 22 July 2020 regardless of differences on other issues of the implementation of the Minsk agreements.”[2] Reportedly, a follow-up meeting in Berlin on 10 February 2022 yielded no tangible results yet.

Even if the Minsk peace process has come to a ground halt at present, it should be realized that the same political and security issues will have to be addressed in any renewed peace efforts in whatever format to restore peace in east Ukraine.

This report highlights that any attempt to overcome the current political stalemate needs to be supported by concrete steps to establish a sustainable ceasefire at the ground-level of the conflict. The report analyses the major reasons for why a sustainable ceasefire was not implemented thus far, and offers a ceasefire management tool referred to as a “Coordination and Verification Mechanism” (CVM). The main tasks of the CVM, which will operate from within the OSCE SMM, would be to assure:

Third-party facilitation of ceasefire arrangements, including monitoring and verification, is almost always needed to ensure that both sides are able to determine each other’s compliance or non-compliance with the ceasefire agreement. This becomes even more imperative when direct contacts are excluded. CVM is therefore primarily intended to overcome the current impasse by establishing an agreed indirect ceasefire mechanism between the sides, to be facilitated by a reinforced OSCE SMM. This requires political will by the sides to commit themselves to third-party facilitation of the ceasefire, including guarantees to the OSCE that freedom of movement and security for the mission in carrying out their monitoring and verification tasks is ensured. Provided such guarantees are received, the OSCE is expected to provide additional resources to enable its mission on the ground to perform the third-party role as envisaged in CVM. It is suggested that CVM could also play a supporting role in implementing other key measures, including in the stalled processes of disengagement of forces and heavy weapons withdrawal from the LoC as foreseen in the Minsk agreements. A sustainable and durable ceasefire can hardly be achieved without full implementation of these interrelated measures.

Finally, it is hoped that these ideas may be taken into consideration as part of the urgently needed political, humanitarian and security measures to start deescalating the current tensions.

[2] Declaration of the advisers to the N4 Heads of State and Government, Élysée/Paris, 26 January 2022.