Time to Step Up EU Mediation? 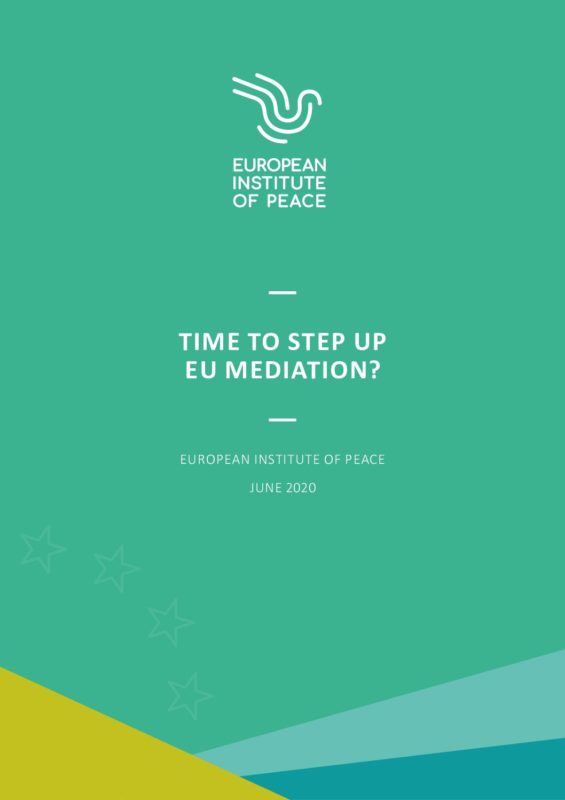 The need and scope for conflict resolution and mediation is going up. The numbers of people affected by violence and conflict is increasing. The world is disfigured by prolonged, internationalised civil wars and growing civil unrest. Great power politics are resurgent, the conventions regulating states’ behaviour are fraying, and international law and human rights are being eroded.

Profound demographic and climatic changes, the emergence of new technologies and of threats are changing the global landscape in ways that should bring humanity together but too often are exploited for commercial and political gain, driving insecurity and a sense of injustice.

The EU has an enormous role to play in this context. It is a powerful global actor pursuing multiple objectives on the world stage. It is committed to human rights, gender equity, sustainable development and a rules based global order, and to supporting others that are taking action, whether inter- governmental and regional bodies such as the UN and AU, or civil society including at the very local level.

But the EU also recognises, as the High Representative has put it, the need to learn “to use the language of power”, to deploy its capabilities, whether political, security, economic or regulatory, more strategically to shape reality, address the agents and drivers of violence, and secure peace.

So what should the EU’s role in mediation be in this context? The review of the EU’s concept on mediation provides an excellent opportunity to generate debate and to define the parameters of the future of EU mediation frameworks.

This study provides a snapshot of the views within the Brussels diplomatic and policy community. Even within this relatively confined universe, there is a very broad diversity of opinions.

There are some important takeaways. Mediation requires a long-term commitment which, given its global reach and longstanding presence in most countries in the world, the EU is well placed to provide. But views differ as to the nature and goals of EU mediation (for instance, as a stabilisation tool) and there is a blurring of the lines between the practice and purpose of diplomacy and of mediation.

The constraints hardwired into EU foreign policy and the degree to which member states will provide the authority and space to the EU to lead in the mediation field are key issues. The room for manoeuvre afforded to EU representatives also depends upon their own skills and the support they receive both from Brussels and from member states.

Identifying where the EU can most profitably invest in and undertake mediation should be shaped by a high degree of self awareness as to how it is seen by other actors, including parties to a conflict in specific contexts, whether states or extremists. Offers to mediate may be accepted for reasons that have less to do with the EU’s mediation capability than with the prospect of access to EU support and resources.

Decisions as to whether the EU is best placed to take a frontline mediation role, or to support others to take on that role, should therefore be based not just upon need and political opportunity, but upon analysis of the context, of the EU’s reputation, its capability and local credentials relative to other actors, whether inter-governmental, national, private sector or civil society.

The EU has taken important steps to adopt an ‘integrated approach’ to its foreign policy. This provides great scope to promote a conflict resolution approach across its broader policy toolkits, ensuring that its many roles complement each other.

In conflict affected-countries, the EU’s engagement in areas such as security sector reform, support for elections or constitutional processes, financial management, infrastructure, development and humanitarian assistance, can benefit further from conflict sensitive approaches and can bolster its mediation objectives if brought closer together. This has long been an objective proven difficult to implement in practice.

Where the EU has individuals in place that combine technical knowledge and conflict resolution skills, the ability to foster trust from all sides, and strong political backing, the potential for mediation support is enormous. Successful deployment of such individuals depends upon human resource and recruitment policies and practices being geared in part to selecting people with an appropriate profile.

There are other ways in which the EU already does and can further contribute to strengthening the practice of mediation. There is scope for the EU to engage with others, both official and non governmental actors, in the definition and adoption of standards and principles in the mediation field, as has happened in the humanitarian field, and to supporting communities of practice in thematic areas.

I hope that this study provides a useful addition to the debate on how EU mediation tools and frameworks will evolve in future. The study was carried out with funding from the German Federal Foreign Office, though the conclusions within it are all EIP’s. I am grateful in particular to Guy Banim for his research and analysis, and to all those who contributed their valuable time and insights.