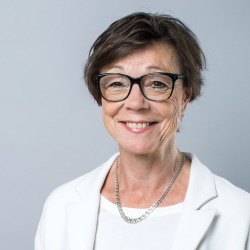 Annika Söder was appointed President of the Board of Governors European Institute of Peace on 11 July 2019. She served as State Secretary for Foreign Affairs of Sweden between 2014 and 2019. Before that she was Executive Director of the Dag Hammarskjöld Foundation working on UN matters, UN reform, peace-building and the SDGs. She has also been a senior manager and ADG of the UN FAO, responsible for external relations, partnerships, interagency affairs and communications. Previously, she served as State Secretary for International Development Cooperation in the Swedish Government and as spokesperson of the Foreign Ministry, and in several positions as foreign policy advisor to the prime minister and foreign ministers.