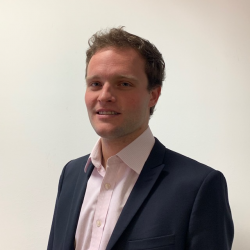 Jamie Pleydell-Bouverie is a Programme Manager at the European Institute of Peace. He manages the Institute’s Middle East Programme, covering initiatives in Israel-Palestine, Yemen, and the wider Gulf and Arabian Peninsula region. Jamie previously managed the Institute’s Early Assessment and Action programme and, prior to that, the Institute’s European Policy Support programme.

Prior to joining the Institute in January 2020, he worked for six years at the international NGO Crisis Action, where he designed and delivered global advocacy strategies to protect civilians in conflict. He led the organisation’s work on Syria from Beirut, Lebanon, for two years (2017-2018) before moving to London to support Crisis Action’s UK office as a Senior Advisor. From 2013 – 2017, he managed Crisis Action’s advocacy at the United Nations in New York, leading joint initiatives with humanitarian and human rights NGOs to engage UN Security Council members and the UN Secretariat. Jamie has also worked as a consultant for the Norwegian Refugee Council in Amman, Jordan (2018).