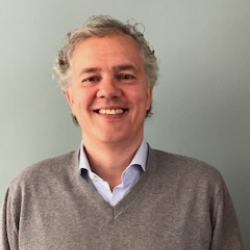 Patrick de Vries is a diplomat from the Netherlands who assumed his position as Senior Advisor to the European Institute of Peace in 2019, in particular leading a team on Afghanistan and advising on Middle East conflicts.

He started his career as a lawyer defending the central government of the Netherlands, including in asylum and refugee cases and policies, before moving on to become a diplomat in the Netherlands Foreign Service with postings in Netherlands embassies in Washington and Beijing.

He served in Kabul for two years (2010-2012), initially as political advisor to the EU Police Mission and later as the Head of the International Police Coordination Board and in that capacity as advisor to the Minister of Interior of Afghanistan.

Between 2015 and 2017, he held various government positions advising on European-Middle East Affairs.

He holds a Master in Law from the University of Amsterdam and participated in a Senior Management Leadership Program at the Harvard Kennedy School of Government. He publishes op-ed’s in the Dutch newspaper NRC Handelsblad.