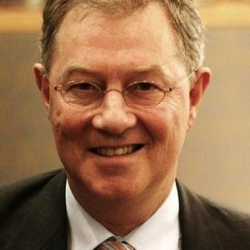 Robert Serry joined the European Institute of Peace (EIP) in January 2020 as a Senior Advisor, leading the Ukraine-Russia Dialogue Initiative.

He is a former Netherlands ambassador with extensive experience in multilateral diplomacy and crisis management having served with the United Nations and NATO.

In 2015 he completed a seven year appointment as the United Nations Special Coordinator for the Middle East Peace Process, based in Jerusalem. He also briefly served as Special Advisor to the UN Secretary-General during the 2014 crisis in Ukraine.

For NATO, he served as the Deputy Assistant Secretary-General for Crisis Management and Operations (2001-2005) and was involved in NATO’s operations in the Balkans and Afghanistan.