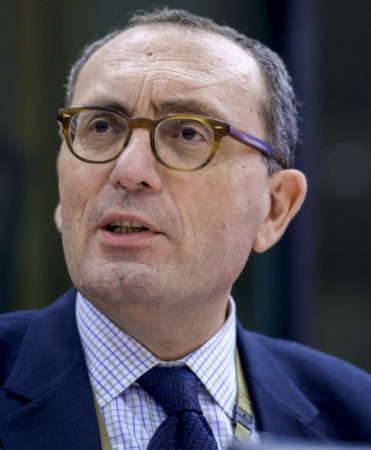 Stefano Manservisi joined the European Institute of Peace as a Senior Advisor at the beginning of 2020. He currently also serves as Special Advisor to the European Commissioner for Economy Paolo Gentiloni and Professor at the Sciences Po’s Paris School of International Affairs (PSIA). In addition, he is a Member of the Board of several Foundations and Think Tanks.

Previously, Manservisi was Director-General for International Cooperation and Development (DEVCO) at the European Commission. Prior to that, he was the Head of the Private Office of Federica Mogherini, High Representative of the Union for Foreign Affairs and Security Policy and Commission Vice-President. In 2014, he was the Head of the Delegation of the European Union to Turkey. Before that, he held different positions at the Commission, including as Director-General for Migration and Home Affairs, and Director-General for Development and Relations with African, Caribbean, and Pacific States. He has also headed the Private Offices of the Commission’s President Romano Prodi and Commissioner Mario Monti. Manservisi is a lawyer by training, having studied law at the Universities of Bologna and Paris-Sorbonne.