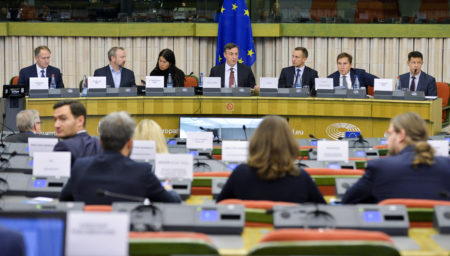 The observers begin immediately, engaging with members of the Board and its Chair, Annika Söder, and with the Executive Director of the Institute, Michael Keating. They will be briefed on the work of the Institute and are invited to identify and facilitate opportunities for it to contribute to the work of the European Parliament relating to conflict resolution, dialogue and mediation support.

“This is a great group of Observers,” said Annika Söder. “Their combined experience and diverse perspectives will enrich our work and contribute to partnerships and policy discussions.”

The European Parliament has played an integral role in conceiving and establishing the European Institute of Peace.  Just over a decade ago, it commissioned three major studies on the possibility of establishing such an Institute: A blueprint for the Institute (2010); a study on the added value and financial appraisal (2012); and a cost-benefit analysis (2013). This was followed by a number of workshops and seminars on European mediation and the future of the Institute that led to the launch of the Institute on 12 May 2014.

“We are grateful to European Parliament President David Maria Sassoli and his team, as well as the co-chairs of the Democracy Support and Election Coordination Group, David McAllister and Tomas Tobé for their support in making this happen” said Michael Keating. “This will boost ways in which we can support the Parliament’s work, and vice versa.”

About the Institute: The European Institute of Peace is an independent body providing practical experience, technical expertise and policy advice on conflict resolution, dialogue and mediation, working with people most at risk and optimising the role of European actors.   More info in the Shaping Conflict Resolution Together – Strategic Plan 2020-2022.