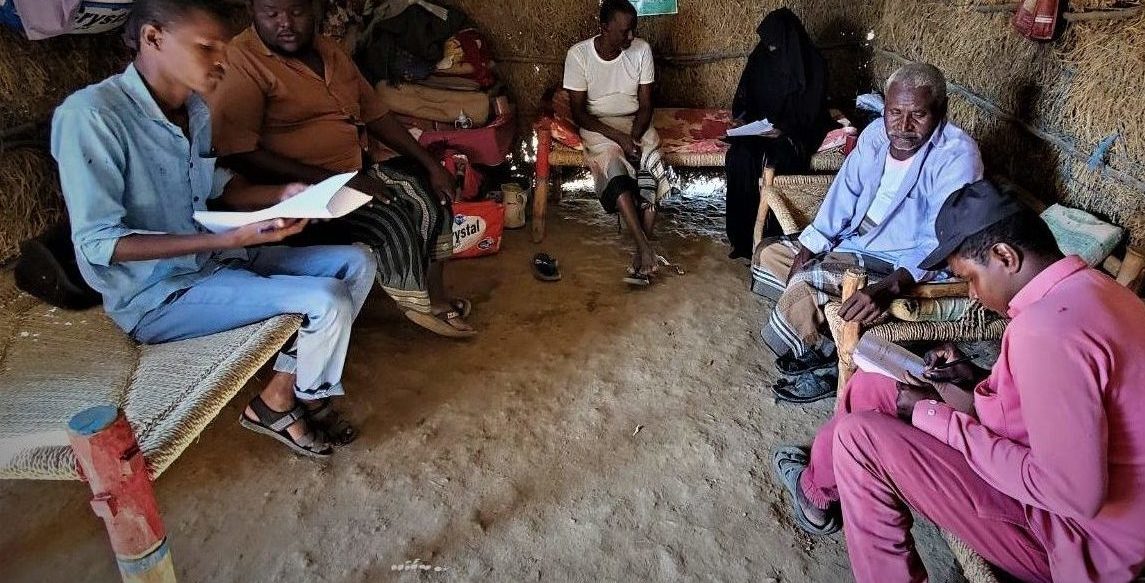 The Pathways for Reconciliation in Yemen process initiated by the European Institute of Peace and led by local teams is the largest and most inclusive effort in recent history to consult Yemenis about their needs, perspectives and rights in the search to lasting peace. The summary report below contains highlights from engagement with nearly 16,000 people in nine governorates: Shabwah, Taiz, Al-Maharah, Aden, Al-Hodeidah, Ma’rib, Sana’a, Al-Dhale’e and Hajjah.

The Pathways for Reconciliation in Yemen project was developed under the European Institute of Peace’s Conflict Justice and Reconciliation programme. It is the largest effort in recent history and ongoing conflict to engage members of society to consider their needs, perspectives and rights in the search for lasting peace. This report covers highlights from consultations with nearly 16,000 people in nine governorates in Yemen between October 2020 and October 2021.

The process reflects a commitment that peace must be shaped by genuine participatory engagement with society beyond those actively engaging in hostilities or involved with the conflict parties. The likelihood of obtaining a legitimate and sustainable settlement significantly depends on how inclusive the process is and the extent to which it engages beyond elite voices of the powerful.

Yemen benefitted from the 2013–2014 National Dialogue Conference (NDC). While some of the ideas and conclusions it reached remain relevant, the conditions in the country are now significantly worse. Although the NDC was innovative and inspirational, its model can be improved upon to promote a more inclusive process that helps facilitate more legitimate outcomes.

The process of engagement is an essential aspect of sustainable peacebuilding. It should not be seen as a ‘soft’ option or an ornament to ‘serious’ talks with conflict parties. Sustainable peace ultimately requires a critical mass of society to buy into any settlement. To do so, they must believe it represents an improvement to the status quo, and that it is in their interest to stick with it and to withhold support from potential spoilers. The more seriously the settlement’s creation takes into account the views of the wider society, the greater the chances of conferring legitimacy and obtaining buy-in.

The Pathways to Reconciliation initiative identifies the priorities and concerns of ordinary citizens. While some of the findings may not surprise, this does not limit their usefulness. Citizens’ genuine engagement in the initial steps of this process is of the utmost importance. A striking proportion of those consulted (78 per cent) did not support any political party; they consider themselves unrepresented, and with no appropriate avenues in which to express their needs and aims.

The initiative generated the following set of lessons and recommendations, which represent an overview of key impressions and findings.

Local dynamics need to be properly understood. The types of grievances and aspirations expressed – related to ending the war and securing a dignified life – varied little among the 36 districts. However, undeniable (and sometimes stark) differences surfaced regarding how these came about, the impact they are having, and visions for resolving them. To address rights-based needs and pursue reconciliation, it is important to recognise that each community has specific options, actors, and means.

Issues are interconnected. It may be tempting, as a confidence-building measure, to take an episodic approach from one location to another. However, the consultations highlighted that developments in one governorate have a knock-on effect on conflict, economic and social dynamics in others, and that grievances are interdependent and interrelated.

Meaningful engagement is possible. There is ample demand, space, and time for conflict resolution efforts to genuinely engage the broader Yemeni population in securing a sustainable and just peace. In fact, one of the striking features of the project is the intense interest – even hope – that at this stage in a disastrous conflict and dire crisis, common efforts can still save and rebuild the country.  There are viable and more effective ways than a ‘seat around the table’ to ensure that their views are represented meaningfully. This initiative importantly demonstrated that the gender-sensitive and inclusive engagement of women and youth is possible and valuable, even under the restrictive security and social conditions present in Yemen. Meaningful bottom-up participation has so far been missing from the process.

Local networks hold enormous potential. Investing in local community networks and platforms for exchange and dialogue to facilitate reconciliation is, unsurprisingly, a key step towards strengthening the country’s damaged social fabric. However, the results of this study also reveal less immediately obvious benefits. First, more than three-quarters of those engaged did not feel that their needs were currently being effectively expressed or represented in political avenues. Second, social media and friends ranked much higher as primary sources of news and information than traditional avenues. Community networks will therefore stimulate and serve as tools for strategic communication and building legitimacy and buy-in for a peace settlement.

Reconciliation is a multifaceted concept. As in other contexts, the idea of reconciliation is widely used by participants but without sufficient regard for the multivariate ways in which it is understood, both in theory and in practice, by those who would engage in or benefit from it. For example, the Arabic term musalaha was used in the context of the consultations to convey important nuances about dealing with individual or collective trauma, pathways of recourse and addressing grievances, and methods of moving forward. Without deeper understanding of what reconciliation means to distinct local communities in practice, and how best to pursue it with methods they consider appropriate, there is a real likelihood that peace efforts will not produce the necessary fruits to sustain the process.

Citizens seek institution-led solutions. For a society that has experienced several recent conflicts (and is currently in the midst of one), exacerbated by an acute humanitarian crisis and breakdown of state institutions, there is a surprising but encouraging base of hope in institutional solutions in Yemen. Respondents across all nine governorates expressed a preference for a strong central government with democratic and effective institutions to guarantee citizens’ rights.

Reverse negative economic trends as a tangible peace dividend. Understandably, participants were extremely affected by a variety of immediate and longer-term issues related to access to basic services, income and the economy – not least due to the currency devaluation. There is a clear expectation that a peace deal would reverse some of these trends. This presents an opportunity, if carefully designed, to foster tangible peace dividends that can respond to expectations and make a practical and meaningful difference to the population, thereby increasing local peace buy-in and the prospects for reconciliation.

Environmental concerns are urgent and important. It is important to recognise the role that environmental factors have played in exacerbating the grievances expressed by Yemenis – in relation to basic services, conflict causes, internal displacement, or livelihoods – and in terms of future risks. They cover both living conditions (e.g. waste management, water pollution and dealing with debris) and natural resources (e.g. resource management, deforestation and desertification). These factors need to be examined further as they directly underpin challenges and, if leveraged well, opportunities for sustainable conflict resolution.

Tribal mechanisms do not attract support as the basis for reconciliation efforts. Even though tribal mechanisms helped mitigate the negative effects of the war in some governorates, most Yemenis consider the use of traditional methods of reconciliation insufficient. In those governorates, tribal leaders and dignitaries possess a level of influence within their communities and can help support peacebuilding and reconciliation efforts. However, the scale and nature of human rights violations and violence in the current context indicate that such avenues are not embraced as a solution.

The lessons and findings from this process generate two primary recommendations for a sustainable and inclusive peace in Yemen.

First, processes that are currently pursuing a resolution to the conflict must find a way to engage meaningfully with all levels of society.

Second, for such engagement to be meaningful, it must:

In the next phase of the Pathways for Reconciliation in Yemen initiative, the Institute will develop a platform to enhance such engagement in at least  the nine governorates focused on here. 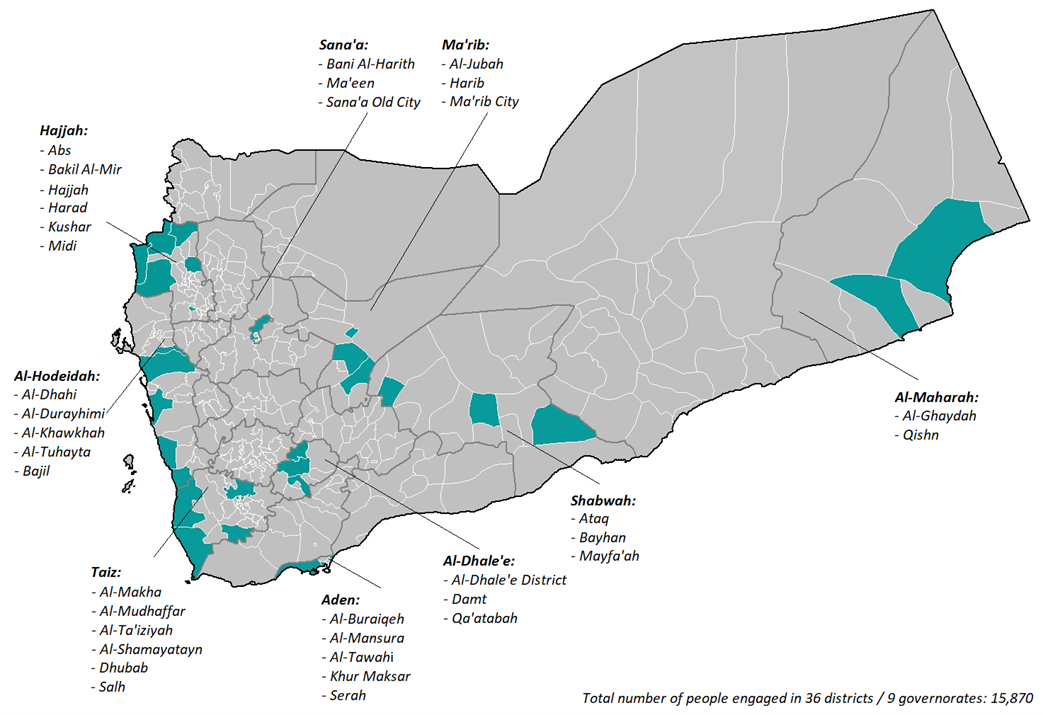 This report presents the results of work conducted in the nine governorates of Shabwah, Taiz, Al-Hodeidah, Al-Maharah, Aden, Ma’rib, Sana’a, Al-Dhale’e and Hajjah. The project is active in a carefully selected 36 districts out of a total of 333 – more than 10% of the country’s total.
Read More 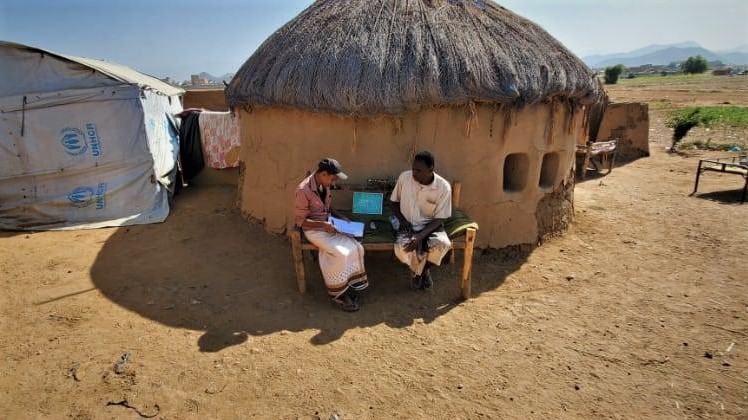 The urgent needs were broadly similar in all governorates. Five main issues were identified: ending the ‘national conflict’ between the Saudi-led coalition and the Houthis, ending conflict at the local governorate level, identifying a roadmap for long-term peace, improving basic services, and restoring and protecting the environment (Table 2).
Read More 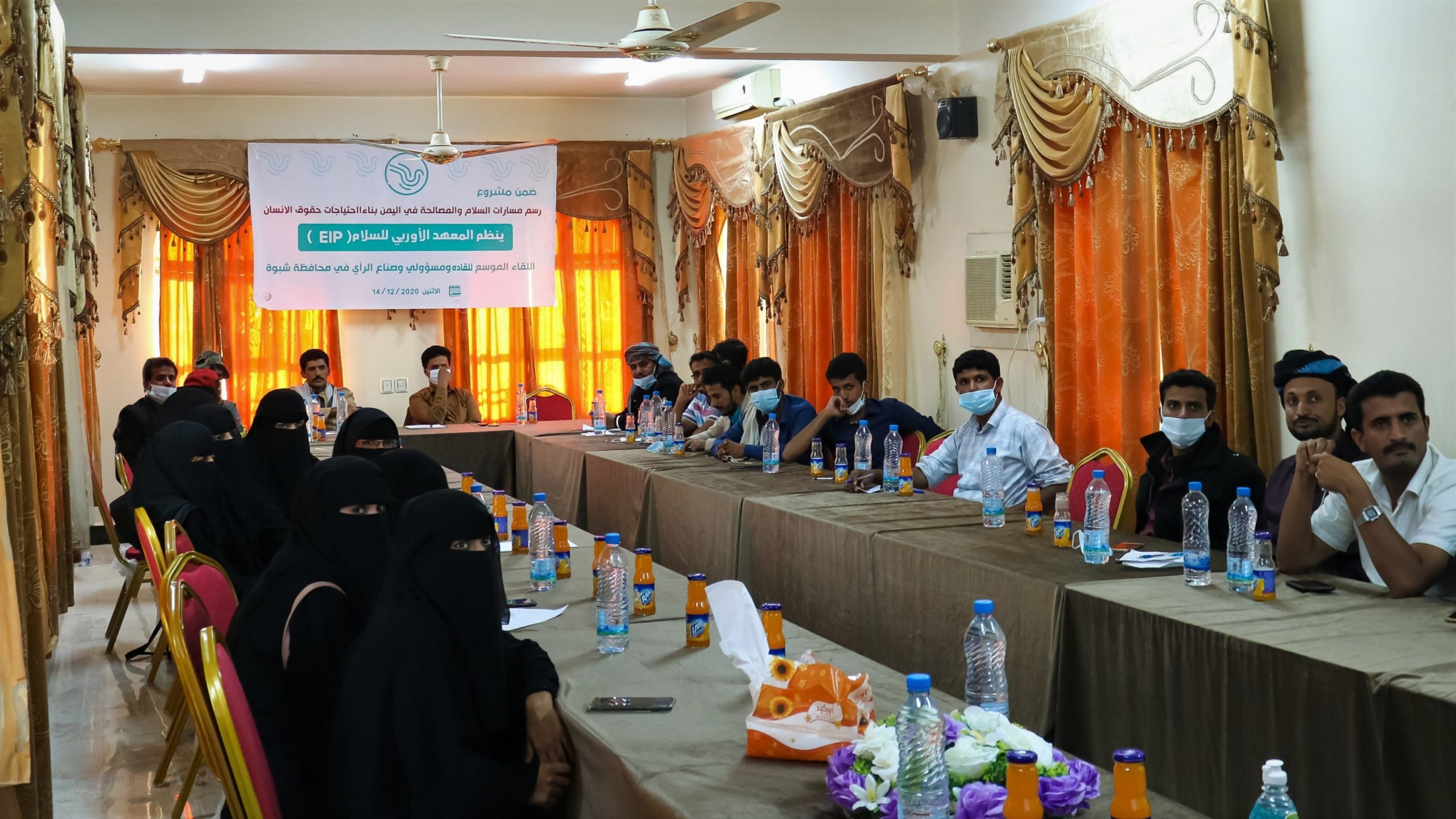 This initiative was inspired by a desire to explore what local reconciliation would look like in Yemen. It was based on a hypothesis that it would mean different things in different places given the history and dynamics of the war. However, the results indicate that the perceptions about reconciliation are broadly similar in all governorates.
Read More

4. Rule of law, justice and accountability

In addition to asking about current and future priorities, the surveys focused on a range of inter-connected issues: the meaning of reconciliation; questions of compensation, accountability and justice; the state of the rule of law; and key state institutions.
Read More 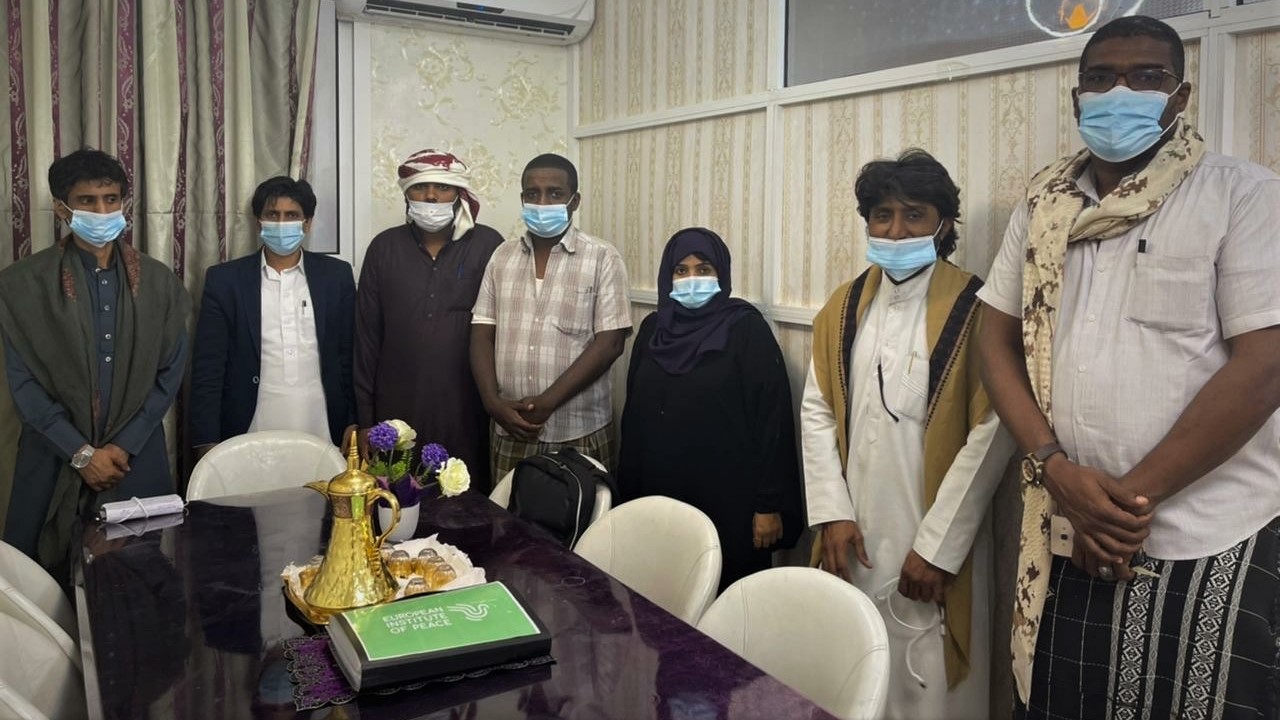 As mentioned above, the idea of restitution as a central element of reconciliation is relatively strong. Based on historical experience, even if people do not frame it as a prerequisite for reconciliation, it is always one of the most significant demands of those who have suffered during war. How do they get their land, farms and businesses back?
Read More

Click here to learn more about the operational context in the nine governorates where the consultations were conducted.

Click here to refer to the list of questions asked under each of the four consultation tools (translated from Arabic).